Hopefully, most readers of this Blog will be somewhat familiar with the terms probiotic and microbiome.  For newly arrived readers, it is suggested to review the earlier blogs to get a working knowledge of those terms.
The focus of this section is on the Antibody  Immune globulin A (IgA) or specifically Secretory IgA (sIgA).  sIgA is the form of IgA that is secreted by all mucous membranes.  These membranes line the nose throat, the intestines and genito-urinary tract.  These tissues are ordinarily moist with mucus and secreted in that mucus is a number of mediators with sIgA being secreted in large quantities every day.   sIgA is a particular protein.  It is the most widely produced of the immune proteins, including all the other immune globulins combined (1).  Only muscle protein has a higher daily synthesis rate.

IgA like the other antibodies, IgG, IgM, and IgE are synthesized to have a site at the end of its arms that physically binds to a unique protein or protein like entity called antigens.  Some antigens are whole virus or bacteria.  Other antigens are proteins like the tetanus toxin, or peanut protein, in the case of allergy. 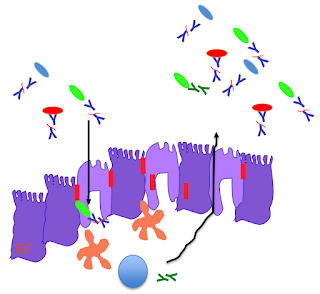 In the gut and especially in the colon sIgA flows with the mucus and there the antibody attaches to certain bacteria that the immune system has previously recognized and determined it is a concern and warrants control.  These residents yet potentially harmful bacteria are called pathobionts.   Bionts are members of the normal microbiome.  Patho indicates they are potential pathogens.  A good example is unique strains of E. coli, such as enterotoxigenic E.C.   ETEC is the leading cause of traveler’s diarrhea.   People resident in a region where ETEC is common are immune due to the binding actions of their sIgA in their gut.
In the diagram, the Yʻs are IgA attached at the base by the Secretory Piece.  The top of the Y binds to bacteria it is designed to control.
The pathobionts are held in check in part by the flow of sIgA.  Stress both simple, i.e., Final exams and significant stress, i.e., moving, divorce,  rapidly and dramatically reduces daily IgA production to the extent that both viral and bacterial infections become more common(2,3).
In the gut microbiome, sIgA binds to pathobionts and thus preventing them from attaching to colon cells.  In many cases attachment is a critical step in the infection process (4). SIgA is involved in several mechanisms used to clear microbes in addition to binding and blocking (5).
An array of dietary components can increase IgA concentrations in all mucous membranes.  The glucans, acemannan, Shiitake and other extracts are well documented to boost IgA production (6).  Bovine colostrum improves sIgA in elite athletes (7).
All of the components mentioned above may have their mode of action on the microbiome as Mannans and Glucans are forms of prebiotics.  Thus the immune benefits of these complex carbohydrates may well be mediated through the microbiome (8).
Thus it may well follow that the addition of HATS probiotics (Human Adapter-Targeted Symbiotics; see the post by that name) has a stimulatory effect on sIgA production.  It is well established that probiotics in the microbiome have beneficial influences on the immune system and this includes the mechanisms for sIgA production (9).
Four lines of evidence speak to the essential roles of adequate sIgA. Research suggests there is an inverse relationship between SIgA and allergic disease reactions in children.  Allergic reactions were more likely in persons with lower gut sIgA (10).   This observation suggests that elevating sIgA via probiotics or prebiotics may help mitigate allergen-mediated immune reactions by lowering the reactive antibody IgE.
As previously mentioned IgA status is reflected in mucus sIgA levels for all mucous membranes.  A significant number of people carry pathogenic bacteria in the nose or nares.  This carrier state can persist for some time without apparent harm to the host. However, nasal bacteria get relocated mechanically, typically on the hands or aspirated into the lower respiratory tract and potentiate infection.  Enhancing sIgA with probiotics was shown in controlled research to reduce the nasal carriage of several pathogens including Staph. aureus and S. pneumoniae (11).
In stressed preterm infants and infants formula fed, probiotics given to these very young children significantly improved sIgA.  The probiotics supplied were B. lactis BB12 and L. rhamnosus GG. Both of these strains are well-established HATS.
Is it possible then that a simple measurement of sIgA in saliva might be a valid proxy for the health of the microbiome and the immune system?   Given the volumes of IgA that are produced every day and the sensitivity of the production system to stressors, the answer is yes quite likely.
Needed is more data and this is data we can collect for ourselves.   There are now three laboratories in the United States that offer microbiome evaluation.  A tiny amount of feces from the toilet paper can be collected on an individual swab and shipped to the lab for analysis.   Additionally,  a simple saliva test kit is available from Somabioscience in the UK.  This kit can service many persons and thus be an investment in family health or an adjunct to probiotic education efforts. More detail will be provided about testing in the next posting.

2.     Tsujita, Satoshi, and Kanehisa Morimoto. "Secretory IgA in saliva can be a useful stress marker." Environmental health and preventive medicine 4.1 (1999): 1-8.