Experiments and Conclusions:  Where Science and Marketing Collide
R.H. Bennett Ph.D.
Applied Life Sciences LLC
Nowadays there is an avalanche of scientific studies on the microbiome.  Around 5000 studies each year fill the pages in scientific journals.  Less than 1 in 10,000 people read them.   This is not data most folks are trained to understand, so the papers remain obscure.   The mission of this Blog is to translate a mere fraction of this science, where appropriate, into practical understandings.
To begin, we need to appreciate not all research designs have equal merit.  All research designs have limitations, and some things like microbiome ecosystems are almost impossible to research due to the extreme number of factors called variables in the systems.
Reductionist Science[1]
Most bench top and animal/human experimentation is reductionist in nature.  That is, we hold all the variables as constant and then test a few.   A good example is vitamin research.  We might feed some mice a complete diet but very low in Vitamin A.  Then in one treatment group add ample Vit. A and see if skin quality, night vision and perhaps immune responsiveness is improved over the mice fed a Vitamin A deficient diet.  This type of research has great value and greater limitations (see footnote reference)
There are many more complex designs, but they are all reductionist in nature and testing just a few variables.  Adding more test variables, like adding extra Vitamin E and having another test groups that are aged mice and another where mice are exercised, become quite complex and the results hard to interpret.
Some Research Is Just Plain Bad
Some years ago a research director that had virtually no experience with lab research designed a very complex mouse experiment with about seven different treatment groups.  The treatments were so convoluted that when the data was analyzed there was little if any valid interpretation. Attempts were made to salvage some data, but the conclusions were erroneous and misleading. Unfortunately, this 100,000 dollar experiment produced no useful information all because it was designed very improperly.  Bottom line here is we must not assume all experiments, even very expensive ones, are designed correctly and the conclusions are valid.
Peer Review: Good But Not Perfect
On the positive side, if a research project is published in a Peer Reviewed (1) scientific journal, the experimental design and conclusions must pass the scrutiny of an independent review of other scientists working in the same field.  While peer review is critical, it cannot in many cases prevent or detect malfeasance or fraud.  Sadly this is all too common, and as such, all federally sponsored research has procedures it requires guarding against unethical research (2).  These same safeguards do not exist for corporate sponsored research. A classic case in point is the fraudulent research conducted by a very notable Harvard researcher. His work was sponsored and controlled by the US Sugar Industry and fraudulently managed to show that dietary fat, not sugar was the cause of obesity (3).  Thus a healthy scientific skepticism and critical thinking have great value when evaluating data about products or procedures.
Systems Research
This type of research is vastly more complex and is ongoing right now in microbiome labs such as the Dr. Rob Knight Lab at UCSD (4).  They collect Mega Data on the microbiome.  They can generate thousands if not millions of data points from one MB fecal sample.  Then they collect hundreds of data points about the person from age to diet to medical history to genealogy.   This mega data is fed into supercomputers and trends, and associations emerge that would be impossible to calculate by one person working on the best PC.
While this tells us much about trends in vast populations of people it has limited value predicting an outcome of a single person. In the figure below the data of 1815 persons fecal MB shows that for those take PPI (proton pump inhibitors aka Prilosec), the microbiome of the gut becomes more like that of the mouth (5).   This is not the case for all persons but a significant trend among 1800.   This is systems research on a population and the best way to understand some aspects of a very complex and dynamic network. 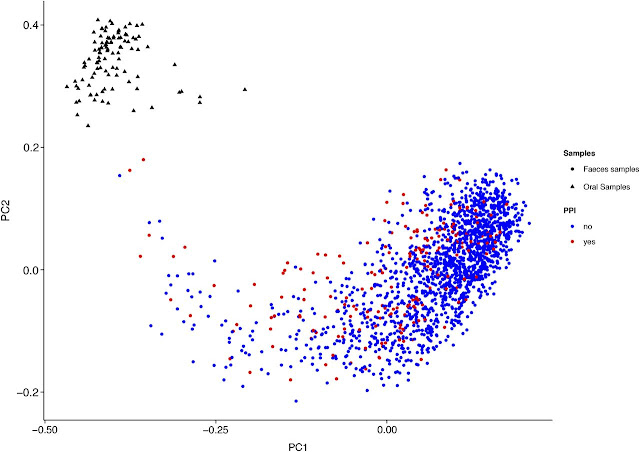 Notice there is a good mixture of blue and red dots on the right side of the chart. But to the far left there are more red dots indicating the MB has become more like that of the mouth and less like that of the colon.   The trend suggests the drug reduces stomach acid enough to allow mouth bacteria to survive and take residence in the gut.  However, there are many red (PPI) users far to the right.  Thus we cannot conclude that PPI use always impacts the gut MB.  From a population or systems perspective, the trend is apparent; it just may or may not arise in all persons.
Types of (reductionist) Experiment[2]
In vitro
In vitro (meaning: in the glass) studies are performed with microorganisms, cells, or biological molecules outside their normal biological context. Colloquially called "test-tube experiments," these studies in biology and its sub-disciplines are traditionally done in labware such as test tubes, flasks, Petri dishes, and microtiter plates. Studies conducted using components of an organism that have been isolated from their usual biological surroundings permit a more detailed or more convenient analysis than can be done with whole organisms; however, results obtained from in vitro experiments may not fully or accurately predict the effects on an entire organism.

As In vitro pertains to the human microbiome, no in vitro test result should ever be interpreted to mean the same effect happens in the human gut microbiome ecosystem.  Remember there are thousands of species of bacteria there.   In a test tube experiment, it is typically just one species.  A positive result would suggest going on to the next type of experiment that logically would be and in vivo lab animal test.
In vivo
“Studies that are in vivo are those in which the effects of various biological entities are tested, on the whole, living organisms or cells, usually animals, including humans, and plants, as opposed to a tissue extract or dead organism. Examples of investigations in vivo include the pathogenesis of disease by comparing the effects of bacterial infection with the effects of purified bacterial toxins; the development of antibiotics, antiviral drugs, and new drugs generally, and new surgical procedures. Consequently, animal testing and clinical trials are major elements of in vivo research. In vivo testing is often employed over in vitro because it is better suited for observing the overall effects of an experiment on a living subject”.
The interpretive value to live animals is far better than in vitro data.  However, in vivo research in lab animals is superior to test tube studies, great caution is needed extrapolating mice and rat data to the human.  While the physiology in the rat and mouse is similar to humans, there are very major differences, and this holds true for the microbiome.  The bacterial species diversity in the lab animals is very distinct from that of the human.  Again a positive result in a lab animal would suggest doing a similar experiment in human subjects.
Ex Vivo
“Ex vivo (Latin: "out of the living") means that which takes place outside an organism. In science, ex vivo refers to experimentation or measurements done in or on tissue from an organism in an external environment with minimal alteration of natural conditions. Ex vivo conditions allow experimentation on an organism's cells or tissues under more controlled conditions than is possible in vivo experiments (in the intact organism), at the expense of altering the "natural" environment.
A primary advantage of using ex vivo tissues is the ability to perform tests or measurements that would otherwise not be possible or ethical in living subjects. Tissues may be removed in many ways, including in part, as whole organs, or as larger organ systems”.

An excellent example of an ex vivo experiment on the microbiome would be to feed a group of people and unique prebiotic carbohydrate.  Then sample the fecal microbiome before and after to see if the treatment altered the diversity and numbers of bacteria in the MB.  Additionally, we could see if the metabolic profile of one or more of the members of the microbiome or different ratios of short-chain fatty acids (essential mediators of the MB) were altered by the prebiotic.

Drug Research Terms not appropriate for Probiotic Dietary Supplements.
Probiotics are dietary supplements and regulated to FDA Supplement and Food standards.  However, we are witnessing specific identical probiotics in development as therapeutics aka drugs. An excellent example of this is Bifidobacteria infantis aka B. longum subsp. infantis.   This microbe in combination with a milk-based prebiotic, galacto-oligosaccharide will be a microbe treatment for high-risk infants and infants born by cesarean section (6).
To get FDA approval as a “drug” making a specific disease claim, the company promoting the therapeutic must go through a hundred million dollar plus process of efficacy and safety research and provide that data for FDA review.

Pre-clinical means tests in lab animals.
In the Pre-clinical (or experiments on animals) the product is tested to see if it produces the desired effects in mice or other lab animals.  If the results are favorable, then the work moves to the Clinical Phase, meaning testing in humans.  Again, this is for the FDA NDA or New Drug Approval process.  Some companies use term pre-clinical to conceal that fact that the data was derived from animal experiments.  To do so is misleading and not permitted by the Federal Trade Commission (7).  Only in limited cases is lab animal testing sufficient substantiation for product claims in humans.
In this context, the terms Pre-clinical and Clinical refer experiment regarding the prevention, mitigation or treatment of a specific disease. These terms must not be casually or intentionally used in the arena of dietary supplements including probiotics.  To do so is viewed as an indirect disease treatment claim and not allowed by the FDA (8) as well as reputable companies.  Thus the consumer should be wary of any firm that uses the terms in conjunction with dietary supplements.  Dietary probiotics and prebiotics are not intended to work in a clinical (illness) setting.  Rather they are intended to restore balance and diversity on the gut microbial ecosystem.

In conclusion, consumers will benefit from a simple understanding of how MB and probiotic research is conducted.  Take the time to read the very fine print in advertisements and attempt to discern how the information was obtained and its validity to the well being of the Human Microbiome.  When in doubt ask for substantiation.  The law requires it be provided.  When in doubt check it out.  The more we know the better the products will become and that knowledge comes from sound scientific investigation.