Microbiome Growth and Death Numbers:  In a Word, HUGE.
Dr. R.H. Bennett
Applied Life Sciences LLC
Copyright 2018 all rights reserved
We are all somewhat familiar with numeric expressions of growth or decline.  For example, we track our income as it increases or decreases. However, can you say what the percent increase or decrease was?  According to the Economic Policy Institute using Congressional Budget Office data, the average wage has increased 22.6% from 1979 to 2007. On a yearly basis that is only 0.8% growth per year (1).  The numbers tell the story not someone’s impressions.
For now, let us try to make it clear with a game that illustrates how bacteria grow to huge numbers.  Growth rates here can be astronomical, unlike wages.  It goes like this; would you give me a penny and double it every hour for a day?
Yes or No? The first hour is one cent, the second hour two cents. By hour 12 the cost would be a whopping $20.48.  But wait!  By hour 16 it is only $1310.  The next 8 hours get expensive since the amount now is going up geometrically. The cost at hour 24 is $83,886; however, the total of 24 doublings is $16,777,216. For you math fans that is  2^24 (two to the 24th power).  Here we see how just two bacteria can become 16 million in only 24 replications.   It gets even more impressive.  Bacteria in right conditions, the right temperature and plenty of nutrients can double in number in about 30 minutes.  This means we could have 16 million in just 12 hours of ideal incubation. 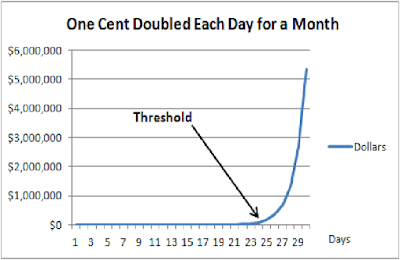 This is the way bacteria grow under favorable unimpeded conditions.  But they don't stop in 12 hours, at 48 hours, it is 2^48 or about 28 TRILLION!!   Fortunately, natural limitations kick in and by 72 hours numbers decline from overpopulation.
Here is how it looks on a chart. Switch days to hours.  The doubling goes along slowly until about the 19th hour then a population explosion happens and increases go geometric.
In the real world data, the growth of bacteria is diagrammed in the chart below. We can see the initial lag phase and then the growth phase where the doubling of numbers is dramatic. Then there is the Plateau phase. In this phase, a shortage of nutrients or competition from other bacteria limits further growth. 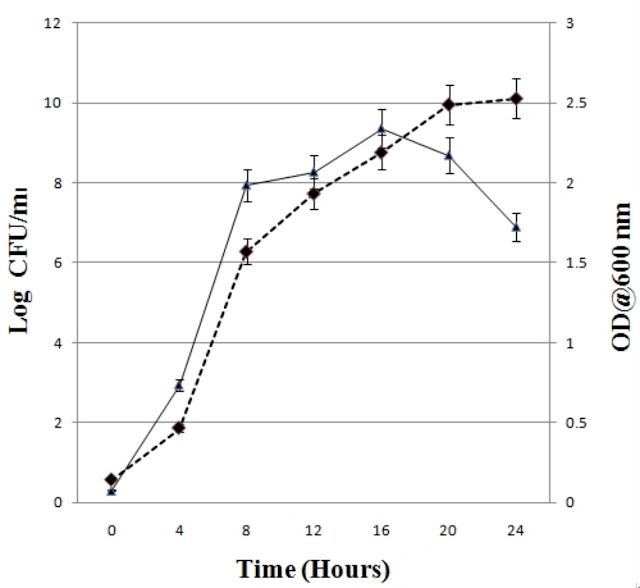 In the gut microbiome, additional controls over bacterial growth are exerted by factors produced by the immune system and others.
This chart depicts the growth of two different types of bacteria in an in vitro or test tube System. On the left axis, the numbers of bacteria are plotted on a log scale. To read this correctly, two represents 100; six represents 1 million and 10 one billion bacteria.
To count the bacteria at these numbers, a microbiologist had to do very tedious serial plate dilutions and then estimate the bacterial numbers by counting Colony Forming Units (CFU) on bacterial agar plates (2).
Nowadays we can correlate turbidity or optical density (OD) of the culture liquid to the bacterial number and express it regarding optical density. The optical density scale is linear which makes summarizing the information somewhat easier. Yet it’s important to remember that the optical density scale imperfectly correlates to a logarithmic scale of bacteria counts.
Let us look at an example of what happens when we average numbers or take simple bacteria counts and arithmetically summarize them. So let’s assume we’ve added 10000 microbes to a test tube with liquid nutrients incubate it for 24 hours and then count the organisms.  Our count shows that they grew well doubling to about one million in number.  What is the percent increase?   It’s one million minus one hundred thousand, all divided by 100000 times 100 or a 900% increase.
Percentage means parts per hundred but when the numbers are in the millions or billions and thus very hard to comprehend
While this sound like a phenomenal increase it is not unusual. A rise from 100,000 to one million bacteria is typical of bacterial growth as can be seen from the graph above.
Now let's do the calculation as microbiologists do. From the data in the graph, we start with about 0.5 log and growth peaks at 9 logs.  This is an 8.5 log increase.  In the other example, while we had a 900% increase, it represents only a 1 log increase.   If one log increase is 900%, you can bet an 8.5 log increase is a vast and meaningless percentage.  For scientists, when an 8.5 log increase is reported, we can quickly visualize the real number.  When percentages are used for visualizing the actual number is very difficult.

Measuring Decreasing Bacterial Numbers.
Keeping track of probiotic numbers and how much they lose viability in processing, storage and once taken internally is essential for obvious reasons.   Stomach acid and intestinal bile will kill a significant proportion of all bacteria consumed.   It is a defense combined with the first step of digestion.  Recall that HATS probiotics (see the post of March  ) are both acid and bile resistant to some extent that allows an excellent inoculum to survive and reach the colon.
Depicted in the chart is an in vitro simulated stomach acid survival test data (3). The uncoated free cells had a starting concentration of 8 logs or about one billion, then at 60 minutes of acid exposure, the count drops to near zero logs for an 8-log reduction.  The alginate-coated cells started over 7 logs or 10 million and at 120 minutes of acid exposure fell to just under 6 logs or nearly a million survived.

Thus we can see clearly that alginate coating allowed a good number of bacteria to survive the simulated stomach acid.   If these numbers were in just percentages, the interpretation would be difficult, and we might not have any idea of the number that The green promotional chart shows a commercial product and its coating allowed 99% to survive the acid test.  How many survived we cannot know from this data and hence it is somewhat misleading. 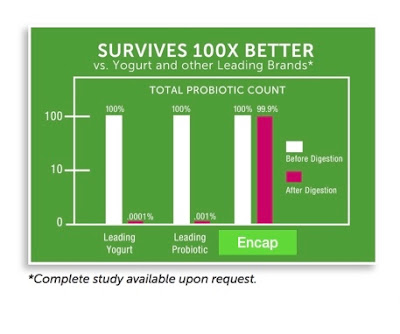 The challenging problem with this kind of data is we have no idea what the starting numbers might be.  In many products, some companies add ten billion microbes in the product and if only .001% survive that is still 100,000 bacteria; an ample inoculum.
We need to recall that aboriginal people had vital microbiomes because when they consumed food and water it always contained all types of bacteria and some survived, and those adapted to the colon environment colonized the gut.
That said, one researcher writes, “Probiotics are able to exert many different beneficial effects on the human host. These effects are mediated by the number of viable cells that reach the gut. The microencapsulation technique used in this study is a valid strategy to significantly improve gastro-resistance of strains, thus enhancing their probiotic activity and allowing the use of a 5 times lower amount”(4).
Thus we see two strategies for delivering microbes to the colon.  One, provide billions and know that a few thousand will persist.  A second is micro-encapsulation. Because they are protected fewer bacteria are needed and most get to the colon for colonization.   The following strategy may have the benefit of ensuring more extended shelf life, and protected viability of the bacteria, especially in high humidity climates.
The Take Home Message
This has been a somewhat mathematical look at microbes, just because the life and death of these microscopic bacteria occur in huge numbers.   A more practical take is that when considering bacteria in supplements or their death from disinfectants, we really need to have the numbers. Percent’s alone can be misleading.
We, microbiologists, get a bit annoyed when TV commercials tout a germicide that kills 99.99% of the germs.  Sounds impressive but when billions can be present on the toilet handle, 99.99% is only a reduction of ten thousand fold, leaving a hundred thousand alive.  For some virus, it takes only one to ten ingested to make us sick.  For this microbe, we need a disinfectant with a  99.999999% kill within seconds of contact.  Want a tip?  A 200-PPM solution of Clorox will do the trick.  The catch is the solution needs to be made up fresh daily*.
As for probiotics that are HATS (human-adapted, targeted, symbiotics) as long a few thousand make it to the colon alive, that "seeding inoculum” most likely will establish a viable colony.  If they are not HATS, the result is no ones guess.

2.     https://www.slideshare.net/martyynyyte/bacteria-enumeration-37491510
a.     (This site demonstrates how bacteria plate counts are conducted)

* 200-PPM Clorox:  ¼ tablespoon of bleach per quart of water. Allow remaining on the surface to be cleaned for one minute.   DO NOT MIX with other cleaners, may result in toxic fumes.
·       https://www.in.gov/isdh/files/Sanitizing_solutions.pdf