Those of us that suffer the constant frustrations of sneezing and wheezy airways take no consolation that more and more people have joined this club against their will.  The homeostatic or balancing forces of our physiology are off kilter for increasing numbers of young and old alike.

The concept of homeostasis or the balancing controls of our physiology is key to our understanding of how the microbiome works.   We must stop thinking about how a product, even a good HATS probiotic can be used to treat disease conditions that result from upper airway inflammation.   That is just not how the ubiome or good microbiome works.   It works by continuously sending mediator signals into the body to sustain homeostasis, even when forces arise to knock it off kilter.

The concept of dysbiosis is quite clear now, after a decade of microbiome research.  External forces, such as a diet high in simple sugars and fat, antibiotic and other medication usage and garden-variety stress, act singularly and in combination to negatively alter the microbiome.  This altered and less than an optimally functional state is called dysbiosis.

Now consider the indignity of chronic nasal and upper airway allergies.  This can be a big annoyance for some and for others so severe, just breathing become hard and frightening.   Yes, the nasal cavities have a microbiome of their own, and it appears the specific strains of microbes in the nares help prevent chronic bacterial sinusitis.  Yet the real link to airway inflammation and the microbiome is in the gut. 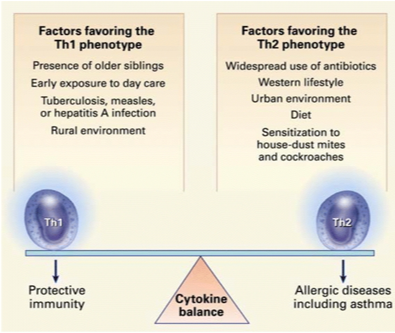 Gut dysbiosis creates mediators that send signals to the immune system in the gut. They shift the immune balance toward inflammation via the TH1/TH2 axis (Sandilya 2011).  The ongoing TH2 dominance caused by dysbiosis eventually signals the antibody or humoral arm of the immune system to shift toward the allergy end of that spectrum.   As a result, we make more allergy antibodies called IgE to house dust mites, grasses, pollens and the like.   The interaction of these allergens with the antibodies sets off more mediators that can trigger an allergy attack or worse yet send the airways into a mucus flooded spasm.   Some asthma attacks are asphyxiating frightening and without emergency treatment can be life-threatening.

Researchers found that the HATS probiotic L. Rhamnosus GG when administered intra-nasally in mice prevented allergic responses to Birch pollen (Spacova 2018).  The nasal probiotic appears to work at the cellular level to impede the mechanisms of allergic inflammation.

We are not suggesting that people should irrigate their nose with probiotics at all. However, when HATS inoculated foods bath the throat, there is a reasonable likelihood that some microbes will colonize the upper airways.  More to the point, however,  HATS probiotics in the gut can restore ubiosis and reduce the inflammatory mediators of allergy.

Studies using orally administered L. plantarum NCIMB8826 increased production of IgG over IgE and produced Interferon-gamma.  This clearly suggests a shift away from TH2 towards TH1 and thus a reduction of allergic potential (Toh 2012).

Another way oral HATS probiotics decrease allergic potential is by helping to maintain the integrity of the gut epithelial barrier.  Dysbiosis is associated with “leaky gut syndrome."  At the cellular level junctions between cells part ever so slightly and allow inflammatory mediators and, in some cases,  inflammatory bacteria like E. coli to invade.  As the bacteria are attacked by immune cells, it may release endotoxins, and these toxins trigger a cascade of events signaling inflammation and the shifts toward TH2 dominance. 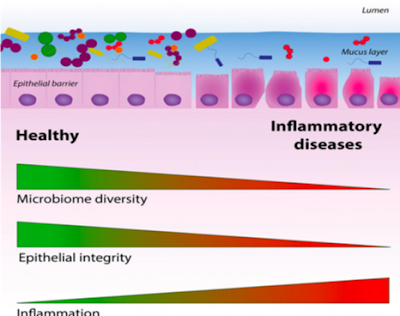 Figure 2. Microbiome health has profound influences on the gut and the entire system. (Martens 2018)

It may seem counter-intuitive that a HATS probiotic working in the gut can benefit the homeostasis of the upper respiratory system.  Yet each day we learn how the microbiome of the gut profoundly influences the homeostasis of almost all body systems.

As we have seen in previous HATS Blog posts that for the newborn more factors work to maintain the balance of the immune response.  Thus, those products that add colostral peptides to the formulation get even greater homeostatic benefits.
For those that curse the wheezes and the sneezes, it is time think about the gut, its microbiome, how it is nourished or abused and how a HATS probiotic may help restore balance to a system that has long been out of kilter.  Restoring balance may take some time so be patient, and it is likely one day, you too will say, you know what, I have been breathing a whole lot better lately.

Microbiome and the Brain

Special Communication: Microbiome Imbalances Promote Alzheimer’s and Parkinson’s Disease.
R.H. Bennett Ph.D., Applied Life Sciences LLC
This HATS Blog and other scientists describe the connection between the gut microbiome (MB) and a broad array of disease symptoms and specific diseases.  These conditions are by no means limited to the gut but involve the gut’s role in systemic inflammation and immune regulation. Brain function and health are not immune to the impacts of the MB.  This connection includes what is termed the “Gut-Brain Axis."
The Gut-Brain Axis
Simply stated, the brain affects the gut, and the gut affects the brain.  Some notable examples of this two-way axis include:
1.     Stress- the brain perceives stress and responds proportionally.  In chronic stress, the brain signals the pituitary to produce Adreno-corticotrophic Hormone (ACTH).  It moves in the circulation to the Adrenal Gland, and it turn it secretes Cortisol.  Cortisol has profound systemic, but in the gut, it will cause a reduction in mucus secretion.  As this protective production slows or ceases, opportunistic pathogens of the bowel called pathobionts begin to invade and disrupt the gut barrier.  The inflammatory response is systemic, and one manifestation is a disruption in higher brain functions like mood among others. Some forms of depression and anxiety disorders may result (Wong 2018).

2.     Dysbiosis Metabolites- A dysfunctional shift in the MB population can be associated with significant modification of the metabolites produced by the MB. Some of the chemicals are part of the regular MB, yet when there are substantial increases or decreases in any number of the metabolites an abnormal physiological response occurs.  This type of disruption can alter higher brain function is a significant clinical manner or the effect may be more subtle and can cause cognitive decline (Agusti 2018).

Recognition of the Gut-Brain Axis led researchers to some very recent and startling observations.   The MB Gut-Brain Axis has a significant and profound role in the development of Alzheimer’s and Parkinson’s Disease.  Yet again we see the dominant role the MB plays in health and disease.

A group of researchers in a consortium of 27 international institutions just published some profound data.  They show conclusively that alteration in the MB results in changes in the metabolites that arise from the degradation of bile-cholesterol acids in the intestine (Mahmoudiandehkordi 2018). In summary, they found:

1.     “Bile acids (BA), products of cholesterol metabolism, are produced in the liver and are further metabolized by gut bacteria. They have major regulatory and signaling functions and seem dysregulated in Alzheimer disease (AD).”
2.     “Observed significantly lower serum concentrations of a primary BA (cholic acid CA) and increased levels of the bacterially produced, secondary BA, deoxycholic acid (DCA)."
3.     The increased DCA in circulation and lower BA resulted in the significant cognitive decline. 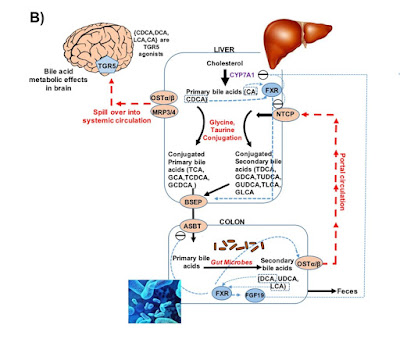 This figure shows the microbes in the colon metabolize bile acids and they get circulated back to the liver and then system-wide.  The restoration of a more balanced MB may well reduce the abnormal bile metabolites thus protecting the brain.
Other recent research found several of the significant bacterial taxa populations were quite different in patients with Alzheimer’s disease. It may be these taxa metabolize the bile-cholesterol acids resulting in increased DCA and decrease CA (Zhuang 2018).
This new research is clearly a breakthrough in our understanding of this terrifying disease.  The dysbiosis common to people on the Western Diet helps to explain why Alzheimer’s has become more common since the 1950ʻs. According to the CDC, the death rate from Alzheimer’s Disease increased 55% between 1999 and 2014 (https://www.cdc.gov/media/releases/2017/p0525-Alzheimer-deaths.html). 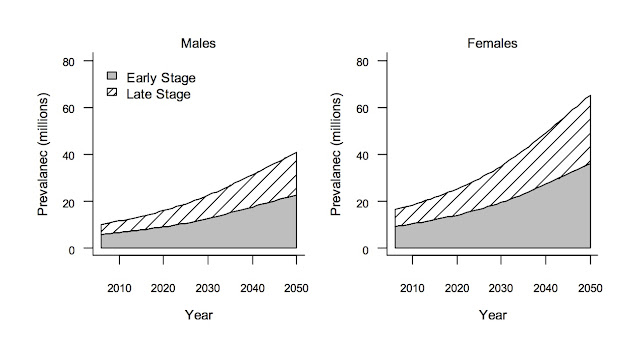 By 2050, prevalence will quadruple by which time 1 in 85 persons worldwide will be living with the disease (Brookmeyer 2007).  Note the trend lines below are curved upward, indicating the attack prevalence is increasing at an increasing rate.  This may well reflect the globalization of the commercial Western Diet. 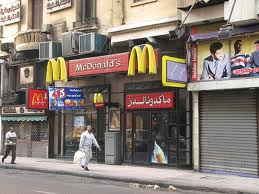 Parkinson’s Disease and the Microbiome
This disease unlike Alzheimer’s attacks nerve-muscle motor functions of the brain but similar in that it is progressive.  Research detailing the MB of Parkinson’s Disease (PD) and healthy persons revealed some conclusive trends (Brookmeyer 2007).   When other factors such as age, weight, diet, and medications were accounted for statistically, many types of MB bacteria populations differ in the PD patients.  The medicines are taken also modify the MB, so that influence had to be accounted for as well.
To evaluate the functional differences between PD patients and controls the metabolic pathways of the unique differences in the MB had to be assessed.  Of the 136 metabolic pathways of the bacteria, 26 were different between cases and controls. Precisely what these unique metabolic activities mean is not known at this time. However, it is more than likely that one or more contributes to the onset and progression of PD.  However, one difference was the production of short chain fatty acids (SCFA) one type of bacteria was significantly reduced in PD patients, and that is consistent with the reduction of SCFAʻs.
This type of alteration of the SCFA correlates to increased inflammatory signaling and one that may alter the microglial cells of the brain.  This is a predominant theory of PD pathogenesis.
The Take-Away
It will be many more years before this pathology becomes very clear and definitive.  However garden-variety wisdom suggests we not wait until then. The data connecting the MB to brain health is robust.  To help prevent dysbiosis that may be a precursor to either of these insidious neurodegenerative diseases, we employ the Eubiotic Strategy.
Eubiotic Strategy
Eubiosis (good biome)  is the balanced and fully functional MB.  The Eubiotic Strategy is simple.
1.     Choose the Mediterranean Diet over the Western Diet
a.     Eliminate refined sugars
b.     Reduce Saturated Fats
c.      Reduce the Glycemic Load
i.     Much less simple starches
d.     Greatly increase soluble fiber intake
i.     Fruits
ii.     Prebiotics
2.     Avoid antibiotics unless the physician demonstrates necessity.
3.     Consume HATS probiotics (see the early blogs) at least 3 days a week
a.     Both encapsulated and non protected to provide some activity for the small intestine where some bile and cholesterol metabolism occurs
4.     Consume Defatted Colostrum products with the probiotics to further modulate inflammation
5.     Share this information widely. People matter; the food industry must adapt.
--End--
www.hatsprobiotics.com