If you are like me, I lose my HATS all the time.  They are simple caps and easily replaced. However, our H.A.T.S. is not what I ware to keep the sun off the hairless head.  The HATS are an essential part of us.  The HATS here are the Human Adapted Targeted Symbiotics of our GI microbiome.  The term HATS is redundant when referring to the natural microbiome (MB) as most all of the 1000 plus species in the gut MB are HATS in one way or another.
We recently coined the term HATS to distinguish probiotics that have HATS characteristics, as opposed to those that are merely bacterial “lookalikes” but cannot become members of the MB once consumed.
So what is the big deal about the missing HATS?  MB researcher, Dr. Martin Blaser suggested a few years ago that we modern Westerners might be at risk and some of us suffering from the loss or even extinction of essential HATS in our MB. (1).
The critical thinkers out there may be asking, what is the concern, there are tens of trillions of bacteria in each persons MB and thousands of species, so what harm is possible if a bunch of species died off?  On face value that is a good question.  However, the problem is a simple cause and effect proposition. In a complex ecological system like the MB, missing just one player in the game could affect many outcomes. 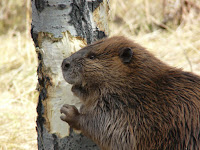 Let's look at a similar ecological problem.  Biologists in Yellowstone National Park noticed some time ago that the Aspen tree groves were in decline.  Believe it or not, an Aspen Grove is the largest living thing.  The trees are one entity connected by a vast underground root system. The loss of one tree affects the entire grove.
When wolf populations returned to the park wilderness, something unexpected occurred.  The Aspen groves began to show signs of recovery.  As it turns out, we hunted the wolf to near extinction. As the wolf reassumed its place in the ecosystem, it preyed on smaller animals. Principal among the pray is the beaver.  These voracious loggers chew small trees down to make dams and nests in the wetlands of the Park. (2)
In the modern Western World some unseen and unforeseen upsets of the MB chip away like the preverbal beaver on the ecosystems of the MB.   The signs and symptoms of these changes are the focus of some fascinating research.
The discovery of Penicillin is one of medical sciences crowning moments. It saved lives and heralded the antibiotic revolution. Today there are 22 classes of antibiotics and a great many formulations within each category.   It is quite likely that readers of this blog found themselves taking an antibiotic and sometimes the reasons were not at all clear.
All too often doctors yield to our demands for antibiotic prescriptions.  The physician has little time or willingness just to say no. As a result of antibiotic overuse, our microbiome is under siege.   While many pathogenic bacteria are now very resistant to antibiotics, the bacteria of the gut microbiome tend to be very susceptible, and some types can be wiped out like an outhouse in a hurricane.
"Antibiotics kill bacteria in the gut, and sometimes species don't come back," says Dr. Dominguez-Bello, a renowned microbiome researcher. "This is especially true with children, whose microbiomes are in the process of getting assembled. Impacts on the microbiome at a young age can have long-lasting consequences."(3) 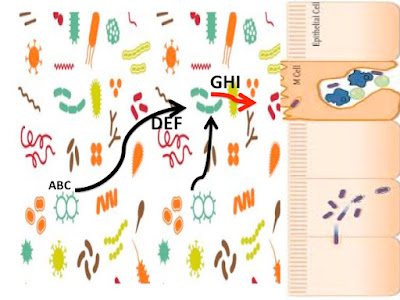 Thus we may have a Yellowstone type of problem in our gut. The problem is we can’t see it or feel it.   Consider this scenario.   In the vast gut microbiome, there are rare species ABC.   It utilizes a prebiotic or complex carbohydrate and produces a substance called DEF.   Bacteria GHI gets activated and attaches to the cells lining the gut thereby blocking a "bad actor" bacterium from attaching and doing harm.

Now let's say that say an absence of that prebiotic in the diet has caused bacteria ABC to die out and soon no DEF is produced at all. 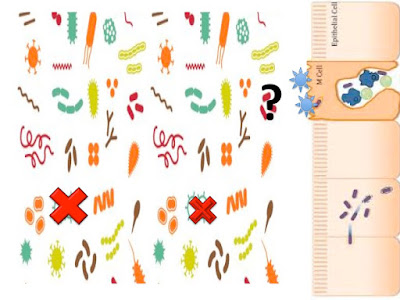 As can be seen here the ABC bacteria are gone.  The signal to GHI bacteria does not occur, and thus the beneficial bacteria no longer have the message to bind to the cell. Open binding sites leave the cell unprotected, and an opportunistic “bad” bacterium invades the place. This event can be the beginnings of an infection.

This same scenario is played out during antibiotic use, some other types of medications, such as long-term antacid use, protons pump inhibitors. (4,6) In the case of antibiotic use, it can take up to a year for the beneficial bacteria to repopulate the gut.  What is clear in this system you cannot do just one thing.  All intended actions, medical or otherwise will have unintended consequences on the microbiome.
Microbiome studies in aboriginal peoples in South America provide some interesting insights.  While the diet is free of  Western products, the use of antibiotics in these cultures does not cause significant die-offs of the beneficial bacteria.(7)  In other words, they did not lose their H.A.T.S.
It is not clear exactly why, but the best guess is they readily get inoculated with new bacteria. Absent in this culture is sanitized drinking water, refrigeration and the human hands do virtually all the work.  Absent are hot water and soap, sanitizers, disinfectants and disposables familiar to the Western household.  Could it be our penchant to wash, sanitize is the expression of our collective misunderstanding of bacteria and prevents the opportunity to replace and replenish our microbiome?  Could it be our world is too clean?  We, microbiologists, are placing our bets here.
No one is advocating we emulate indigenous cultures; we could not if we tried.  Is it not likely we will give up our attachment to killing 99.99% of all household germs. The more logical and acceptable solution is HATS. We can add HATS with the dietary supplements and fresh earthy foods we consume.  Today's marketplace has excellent and well-researched probiotic HATS, and better ones are on the way.   We can worry less about losing our HATS.  It was not too many years ago when we lost our HATS we did not even know it.
Note:  Read HATS Numbers and Names to assist the search for great HATS.